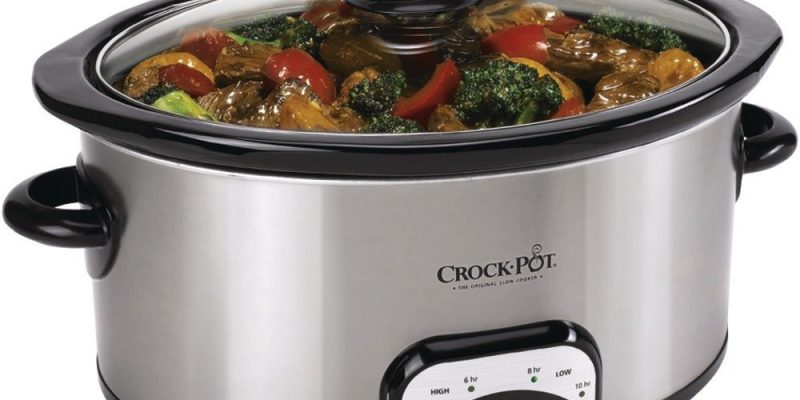 Most people think of microwaves, hot plates, and George Foreman grills when they’re asked about appliances made for people on-the-go. However, to overlook the common slow cooker would constitute a major oversight. With a slow cooker, even the busiest college student or workaholic can throw together a few simple ingredients and set a meal in motion that will satisfy them for days.

“It’s a perfect item for simply heating up canned stuff too… But the great thing about the slow cooker is that they can set it all up, even if it’s canned soup or canned chili, in the morning, and it’s ready when they get back from class anytime.”

Whether you’re slow cooking some pulled pork or brewing up some tasty curry, the slow cooker is an easily used appliance that makes extremely savory and satisfying meals possible for even the laziest and least experienced chefs.

The slow cooker also lends itself easily to the classic dishes of a wide array of nationalities. Cookbook author Anupy Singla, author of 2010’s “The Indian Slow Cooker,” celebrates the slow cooker for being an appliance that requires extremely little “hands-on time.”

Slow cookers can also double as ice buckets and even air fresheners if a user cooks some cinnamon sticks on high. That said, perhaps their most satisfying use is to cook up hot meals that necessitate only prep time and minimal attention. Here’s a few examples.

While most people might make their oatmeal in the microwave or on the stove, cooking one part steel-cut oats to four parts water for six hours on low can make oatmeal that tastes more satisfying than any instant packets.

Pulled pork is another fan favorite. Take one boneless pork loin and add it to your slow cooker with a bottle of barbecue sauce. Let it cook for 8 hours on low and you will have the makings of an extremely delicious sandwich on your hands.

Cheesy grits are another dish that will be sure to attract company on any weekend night. Throw in four parts water to one part grits, cook 6 hours in cheese equal in volume to the grits and you’re all set for a delicious snack that tops mac n cheese by a long shot.

Bibimbap is also sure to knock your friends’ socks off. Cook two cups of brown rice with three and a half cups of hot water for two hours on high and then six hours on low. Stir in chili sauce to taste, kimchee, greens and veggies, leftover chicken, or other meats if you’re carnivorous, and even a raw egg if you want. Mix it up and you’ve got yourself a delicious bowl of bibimbap.

Kidney beans lovers will appreciate this one: throw three cups of dried kidney beans in a slow cooker and add a chopped onion, two chopped tomatoes, minced ginger, minced cloves of garlic, and two to four chopped chilies. Throw in four whole cloves of garlic, two tablespoons of salt, a tablespoon of cumin seeds and two teaspoons of garam masala and turmeric powder. After twelve hours at high heat, add some fresh cilantro and enjoy.