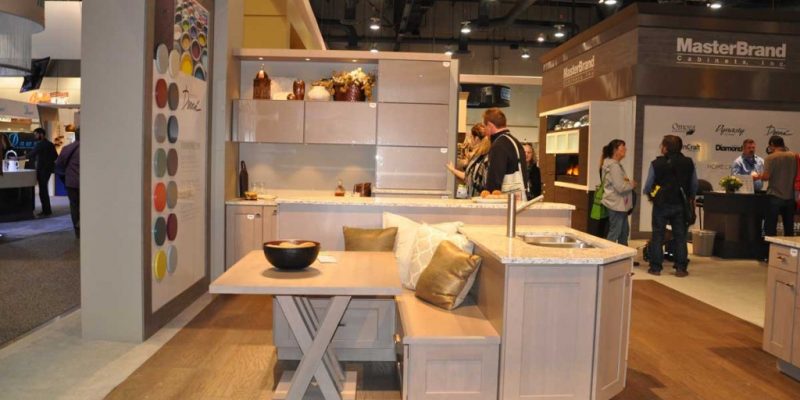 Gone are the days when every home had the same basic kitchen appliance lay outs; now that cultures have sprung up around certain kinds of diets (gluten-free, vegan, paleo, etc.) and lifestyles, the contemporary luxury kitchen is designed to cater to the specific needs of the kitchen owner, regardless of how wacky that appliance may be.

According to attendees, there were a few repeating motifs at the Industry Show this year. One such trend was the return of the colored appliance. While there were still plenty of stainless steel pieces on the catwalk, brightly colored appliances were also present, in larger numbers than usual.

“Some people want to make a statement,” explained Valentina Bertazzoni, director of style and branding for her family’s company, which is currently putting out bright orange appliances. “You need a focal point, and cooking is a focal point.”

Some appliance providers are hedging their bets that the colored appliance market hits another big boom; Aga, owned by Middleby Corp., advertised a five-step “build your own” range with a choice of fuel types as well as options for two-, three-, five- and even seven-oven configurations with 15 enamel finishes. A matching collection offered a range, vent hood, dishwasher and refrigerator all in dark red.

As if the use of bright color in kitchen appliances weren’t retro enough, some companies like Northstar Appliance’s Elmira Stove Works division are creating vintage-looking appliances that look straight out of the 1950’s.

Another repeating trend at the Industry Show was the proliferation of appliances with new and customized methods of approaching cooking time.

Take Viking, a company also owned by Middleby that debuted a 30-inch Progessional TurboChef Speedcook double wall oven that was equipped with high-speed commercial cooking options that enabled the user to prepare foods as much as 15 times faster than conventional ovens. The top oven was capable of circulating heated air at speeds up to 60 mph, enabling it to cook a 12-pound turkey in as little as 42 minutes, according to the company.

The TurboChef Speedcook is also programmed with over 400 cooking profiles, plus bake, roast, broil, air-crisp, toast, dehydrate, microwave and defrost modes. Its bottom unit functions as either a conventional convection oven or a warming oven.

Another prime example is Gaggenau, which recently developed a 400 series combi-steam oven that comes with a sous-vide function capable of regulating temperatures from 120 to 200 degrees for long, slow cooking in a sealed bag. The oven also an automatic cleaning system, a feature which the company claims is the first of its kind.

Thermador drew a crowd with its massive, 60-inch wide Pro Grand range, which comes equipped with six burners, a grill option, or a grill and griddle option. The range can come with either two convection ovens or a standard convection oven paired with a steam/convection oven as well as a warming drawer.

Finally, attendees noticed a rise in appliances that companies offered customers to customize to their preferences. This is not a revolutionary idea; Thermador has been creating “Culinary Preservation Centers” (for which users can mix refrigerators, freezers and wine storage columns to their heart’s content) for a while now. What’s significant is that the trend seems to be on the rise.

Sometimes the customization is not offered in the order but in the appliance itself; the Freddy from Irinox of Italy can blast-chill and shock-freeze foods, then convert into an oven for low-temperature roasting.