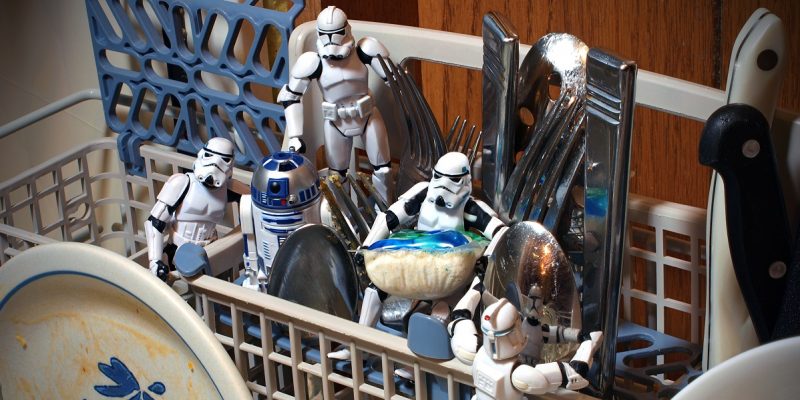 Swedish home furnishing and appliance mogul IKEA recently paired up with Whirlpool to create a line of low-cost appliances that fit snugly into any contemporary kitchen and offer that same IKEA-only five-year warranty.

For only $849, buyers can take home the U.S.-manufactured IKEA Renlig IUD8555DX, which is one of the least expensive panel-ready dishwashers in the industry. Buyers can pick between 25 different panels, the cheapest of which is only $10.

Dishwasher reviewers have appreciated its flexible exterior and its 24-inch depth, both of which allow it to be one of the most versatile and easily dressed-up dishwashers going for under $1000.

Inside the appliance there are few surprises; true to its price, the Renlig is identical to just about any entry-level stainless interior dishwasher made by Whirlpool, with mostly fixed tines (meaning only so many dishes can be placed into the rack and there’s some limited flexibility in terms of the size of the item) on its bottom layer and an unadjustable top rack.

Like most standard integrated dishwashers, the controls are set atop the door in a layout that is user-friendly and requires a very simple initial set-up. Small blue LED lights make it easy for users to understand what options have been selected; they also reveal what stage of the cleaning cycle is underway at any given time during a wash.

The Renlig offers five different cycles, all of which can be bolstered by five different options, including a Sani Rinse feature. Almost all features are compatible with all cycles, but a quick look at the user manual is advised for those wondering exactly which pairings will create ideal results.

For those of you rushing to the IKEA website to order yours, remember that this model is only one of many Renligs. There’s also a less expensive $599 front-control model known as the IKEA Renlig IUD7555DS. This model has less personalized stainless steel cabinetry and is said to perform about $200 worse than its more expensive brother; apparently the model’s upper rack is rickety and sticky, its cutlery basket takes up too much room, and the user is forced to use one button to toggle between five different wash cycles. That said, it’s a relatively reliable option so long as you’re willing to scrape off the stickiest stuff on your dishes before you load them, plus it’s got a five-year warranty.

The one complaint by reviews and buyers alike? No matter what cycle you choose, this Renlig just cannot remove baked-on spinach. The failure is a testament to the benefits of running a wash quickly after adding caked-on or grimy plates to the load; this inexpensive dishwasher is no miracle worker.

This Renlig is also more quiet than your average dishwashing model, topping out at a noise rating of 48dB. That means the typical conversation should go unobstructed by the noise of a load running, though apparently the decibel rating is somewhat affected by the user’s choice of panel style.

In conclusion, even if you can’t find every crazy niche kitchen appliance at IKEA, the Renlig IUD8555DX is a testament to the Swedish company’s ability to be a legitimate one-stop shop for home furnishings that anyone can afford. This particular dishwasher model might not be as effective as uglier alternatives, but that doesn’t change the fact that it’s one of the most affordable, panel-ready, potentially attractive dishwashers on the market.

That said, if you’re interested in IKEA’s 5-year-warranty and happy to settle for stainless steel, the $599 Renlig IUD7555DS may be more your cup of tea. If you are looking for Dishwasher Repair Services in Los Angeles, feel free to contact 180 Appliance Repair.