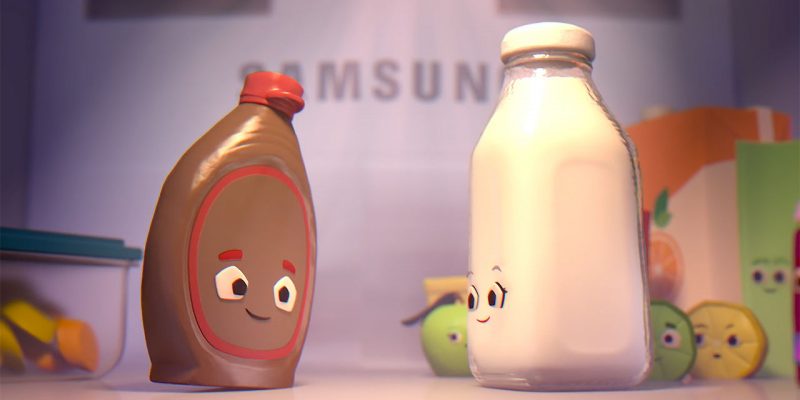 Samsung has a name more commonly associated with electronics then home appliances, but lately the tech mogul has been working hard to not only revise its brand, but to bridge the gap between the two categories of products.

Their most recent advertising campaign involves a new company product that made waves at this year’s Consumer Electronics Show (CES): the Samsung Family Hub. Using television spots, print advertising and digital content, Samsung will be introducing prospective customers to their new outlook on household electronics, appliances, and everything in between.

“Samsung has strongly reinvigorated the home appliance space with fresh thinking and functionality that have taken appliances from a ‘need’ to a ‘want.’ With the new and innovative Family Hub Refrigerator, we are transforming the communal kitchen experience for consumers in ways that will re-define how they view and use their refrigerator,” explained John Herrington, Senior Vice President and General Manager of Home Appliances at Samsung Electronics America.

“Now more than ever, we are delivering in a big way on the promise of the Internet of Things, not only in refrigeration but in cooking, with a new Wi-Fi-connected range that takes cooking convenience to a new level.”

The TV spot features actors Kirtsen Bell and Dax Shepard, who use the Family Hub to manage and throw the perfect birthday party for their daughter. The couple will also return in commercials for some of Samsung’s latest laundry-related innovations, including the Front Load Washer featuring AddWash, Activewash, and Integrated Touch Controls.

“As the ultimate multi-tasking couple, Kirsten and Dax are the perfect pair to help launch Samsung’s home appliance products this year,” stated Kate Cheng, Vice President of Home Appliance Marketing at Samsung. “With busy lives, young kids and a home to run, they embody millions of other families looking for new ways to manage their lives and stay connected to one another. Our kitchen and laundry appliances are built to deliver innovations that are meaningful and solve real-life challenges.”

According to Samsung, the first ad featuring the Family Hub is a 60-second spot that started airing on May 9. There will also be three additional 30-second posts for the Family Hub, AddWash, and Activewash to round out the campaign.

Kirsten and Dax have been proud supporters of Samsung advertising since 2014, and have helped Samsung to introduce new products from many different categories to general audiences. The couple is now in their second year making appearances in Samsung advertising campaigns for kitchen, laundry and cleaning products, all of which have been very successful ventures for all involved.

“We’ve worked with Samsung for several years now and are always excited to see what products they come up with next. Their new line of 2016 appliances is incredible,” stated Kirsten Bell. “The Family Hub is fantastic- the way it lets us keep track of our schedules, share photos and even put up our kid’s artwork means we can always keep in touch. Being able to look at your phone while you’re at the grocery store and seeing the inside of your fridge to see what you need saves time and makes everything easier.”

Samsung’s campaign won’t end with the industrious and likeable couple. They’ve also created an original, digitally animated film that will serve as a sort of advertising preamble to the overall creative campaign. The short film focuses mainly on showing off the efficacy of the Family Hub’s innovative camera feature, which enables owners to view what’s inside their refrigerator when they’re away, using an app on their smartphone. The animated short makes a joke of what happens in a refrigerator once the door is closed and features many silly, cartoonish jokes. The film and its related content will be featured in many forms via in-cinema placements, digital media units, and on brand and influencer channels. The Hub will even be featured in Bon Appetit magazine.